Getting There - The Rig

For the "Average Joe" bikepacking is not all that much different from backpacking or even packing with horses. It's all about getting as deep into the woods as you possibly can get. Horses offer a more full range of access because they can travel vast distances as well as get into the designated wilderness area that bikes are not allowed. Backpacking is limited to what you can carry on your back and for how long - most of us it's typically less than 10 miles. Bikepacking falls somewhere in the middle - with most of the weight being put on the bike/trailer and the bike being more efficient than walking, we can now carry more gear and supplies than a typical backpacker - thus get much further away from civilization and enjoy the peace and tranquility our gorgeous mountains provide!

There are typically two different kinds of rigs that are used for Bikepacking, which is not to be confused with Bike Touring.

Bike Touring is a means of self-contained cycling trips for pleasure or adventure with rack-mounted panniers that can range from single to multi-day trips and will consist of more paved and dirt roads and virtually no singletrack.

This has long been debated with advocated on both sides - and the reason being is that this is really no right way or wrong way when it comes to these two methods - it's really a matter of preference based on the amount of gear, trip duration and the route you'll be taking. 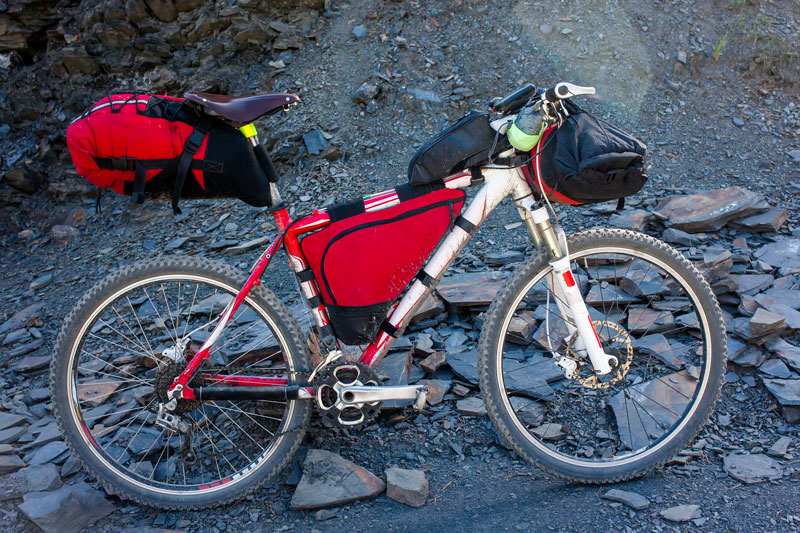 Bikepacking Self-Contained is typically an adventure that utilizes a rack-less means of carrying much lighter gear, and routes are usually more off-the-beaten-path singletrack, river crossing, game trails and routes that would usually be impossible to traverse. Frame and seat bags like the ones from  Revelate Designs are very common in the bikepacking community. You get a verity of different configurations and can add or remove to accommodate the needs of your specific trip. This method does have some limitations; first being your carrying capacity is much smaller. Second is all the bulk on the bike can make maneuvering through tight or technical singletrack difficult at best. Bikepacking w/Trailer and more typical a single-wheel trailer is the second method that is starting to gain more traction with the bikepacking crowd - and is the method that I have chosen. Trailers have been around for a long time - but have been typically limited to touring bikes (road or cross) with 700c wheels limited to about 45mm max widths and some 26" mountain bikes equipped with standard quick releases. BOB did make a yoke (Front Fork) called the Yak28 that fits 700c wheels with fenders, and by default also fit 29" MTB wheels - but still needed a standard QR skewer to connect. Lately, there is always the issue with newer mountain bikes and their rear fixed thru-axles, such as what is found on my Echo. My choice to go with a trailer was made because of the several benefits I found appealing. I like the idea of being able to carry a bit more gear and not have to pile everything on my bike. I'm still going as light as possible, but have a little extra room for those creature comforts we sometimes give up on these kinds of trips, making it possible to extend my trip by a couple of additional nights if I choose. The other extremely sweet benefit is that once I get to my destination, all I have to do is pull two pins and the trailer is disconnected, and I can now head out and explore the local trails without all the extra baggage!

I found a used BOB Yak on Craig's List at an incredibly low price. Thinking that I would do this on my Cross bike - I went ahead and bought it. Then in comes The Robert Axle Project - the definitive leader in Thru-Axle solutions for all things bike trailers. Their axles are machined right here in the USA and are specially engineered to attach the BOB Trailer. This gave me some hope that I might be able to to take the fat bike - maybe? I was still struggling with the fork and the fact that the stock fork would not fit the fat wheels - and the Yak28 fork was only an afterthought for 29ers as it was really made for European wheels and 700 with fenders - it just happens to work with 29" - could it possibly work with 4.8" wheels?

10mm off-set on the Borealis Dropout.

Searching the internet, I found an inexpensive Yak28 fork on an obscure website and bought it. When it came - I was happy to see that it was deep enough for the fat wheels - but it was not nearly wide enough. Ha - nothing that a 4x4 bench post and a wall couldn't fix. I pulled open the fork so that it was wider, then bent the "hooks" back parallel with the wheel and that re-aligned everything back up nice and cleanly. With the new fork fitting well, I went ahead and pulled the trigger on the Robert Axle (their site makes it super easy to get the correct one) for the Borealis Echo and it came with two washers helping to recenter the fork - see the Echo uses an offset dropout that extends about 10mm further out from the frame (see photos below) on the drive side, while the non-drive side is flush. These extra washers make everything line up nice and sweet bring the center of the fork back inline with the center of the tire. The one nice thing about this off-set is the fact that it does move the fork arm a little more away from the derailleur, but Chris form RAP tells me that this off-set is rare as most fattys are flush on both sides and do not require any additional spacing. Note: I spoke with Borealis, and they only used this type of hanger on the Yampa and the Echo.

As a side note, Chris from The Robert Axle Project is working on a new Front Fork design that will be better suited for fat bikes than the stock Yak28 fork. Even though the Yak28 is made of CroMoly steel and therefore can be bent to fit the extra wide thru-axles, there is a limit to the available tire clearance. I am hoping to have a prototype sometime in June to use on the upcoming trip coming - fingers crossed!

For those wondering, this was one of the older "silver" trailers - one of my friends owns Rock City Powder Coating, and he took on the project of painting to match "my" theme. I love Black & Red, and Daniel did an awesome job coming up with a design. I also picked up a black anodized wheel from Goodwill for $5 bucks and threw on a 2.35" Kenda Comp III tire I found on Amazon to give the rear a little more beef and stability. 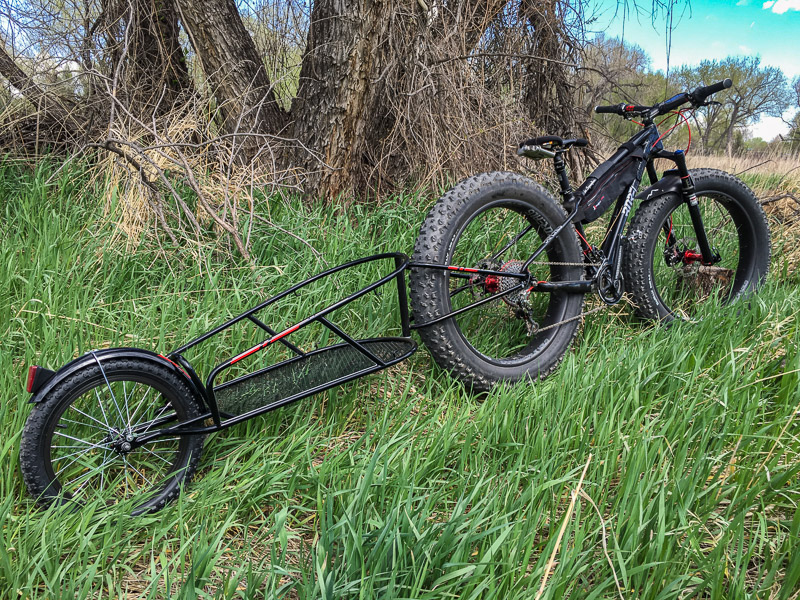 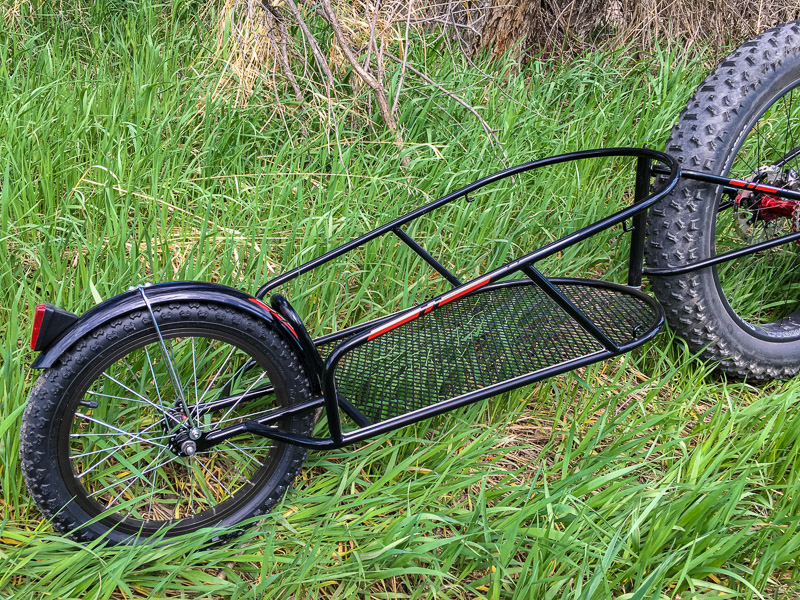 Below are a few images of the configuration- each image has a caption at the bottom to describe what you are looking at. 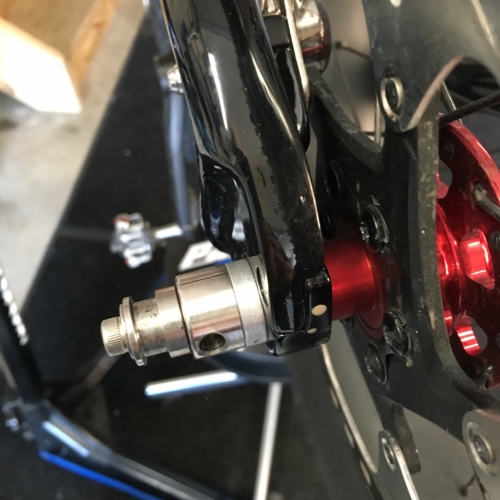 Non-Drive Side one 5mm Spacer - I need two to make the clearance. 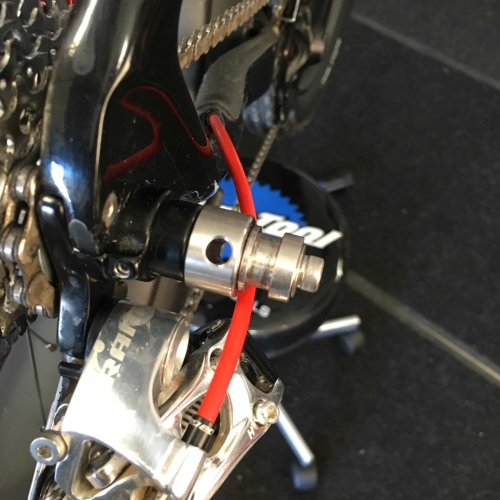 Drive Side - the black extension is part of the dropout where the axle screws into. 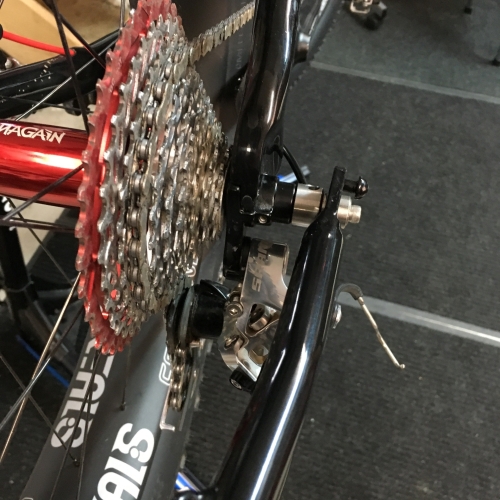 Drive Side - Fork modified to fit the wider axle width. 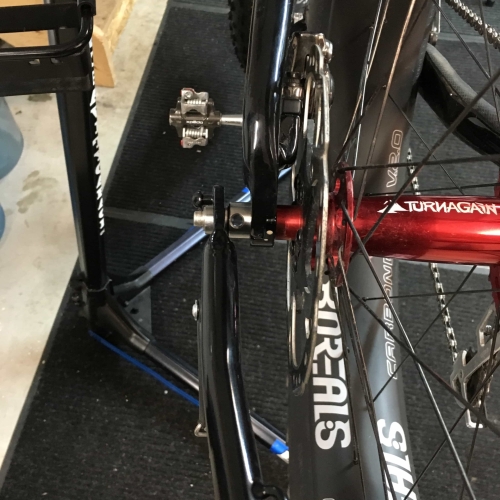 Non-Drive Side - Fork modified to fit the wider widths. 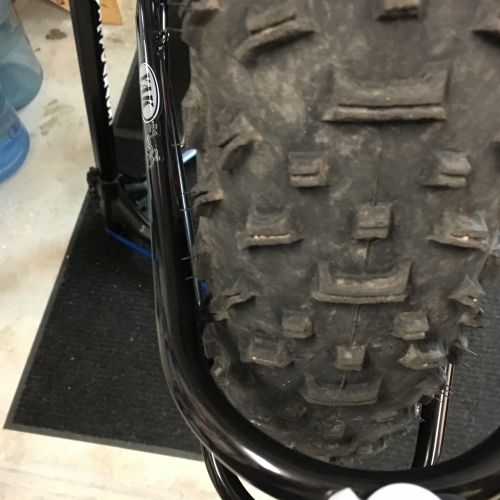 With no fork mods and no spacers, there is an offset clearance problem. 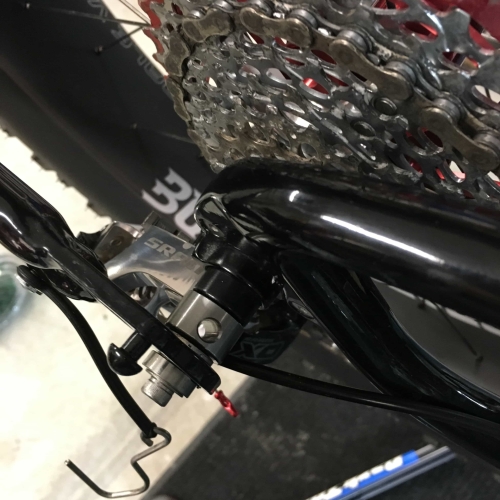 Another example of the drive-side spacing.
Previous: Inspiration to Ride
Next: Planning the Route